Anniversary of the railway 130 years

On Saturday 2 October, we will connect the anniversary with a celebration in Oscarsparken in Vännäs.

The steam locomotive comes to Vännäs and travels back and forth to Umeå-Vännäs as well shorter local tours.
Anniversary scene in Oscarsparken with known (but as yet undiscovered) local abilities. Association exhibitions, activity areas.
Compete for gift cards at Vännäshandlarna and take advantage of various offers in the stores.

On October 1, 1891, King Oscar II inaugurated the upper Norrland main line to Vännäs. Our nice station building was also ready to transport passengers between Köping and the trains. The railway has since been a central point that has shaped the development and growth of our community in Vännäs.

We want to pay attention to the 130th anniversary together with everyone who is interested in highlighting the culture and history of the municipality this year.

Saturday the 2nd of October is our anniversary day where we can celebrate together in the form that society then allows with the pandemic in mind. 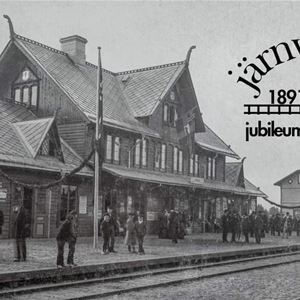